Learning the History of Billiards 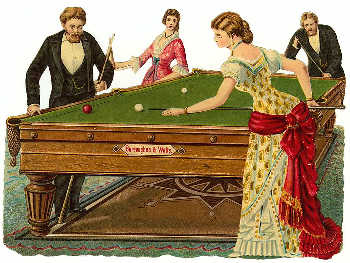 Billiards is one of the most raved game by various players around the globe today. It has been revered for its outstanding feature that allowed it to be open for various age brackets and economic status - whether you're from the lowest rank, or if you're part of the line of nobles. Many may be playing the game today, but only a few will surely be curious enough to tackle the depths which the history of billiards belong to.

The history of billiards go way beyond the time of the 15th Century. Back then, there was an outdoor game raved in the Northern Part of Europe and was deemed to be probably from France. This lawn game was quite similar to croquet and from there, the fun was brought indoors, on the table and to the pool with grass-like floor we know of today. The term for the game was also derived from French words which was widely debated if it's 'bille' which means ball, or 'billiart' which means 'one of the wooden sticks'.

Of course, before it derived from being called such, the pool table, the balls and the stick used for the game all had their fair share of history before it all coagulated into the game we know of today. The stick was made during the near-end of the 1600s, however, back then it was only limited for the use of men while women still stuck in using the maces. The table itself was only seen as a wall in order to prevent the ball from falling, however, countless players learned to manipulate and use these walls they called banks, and gave birth to bank shots which is widely used today which involved using the walls to bounce the balls and hit the target.

In the 1800s of the history of billiards, the game is revered as a game for Nobles, however, there are countless evidences that proved it didn't just remained that way. It continuously garnered changes like the use of chalk for the cue, more balls, more variations and more, until it reached to the point we now have today.