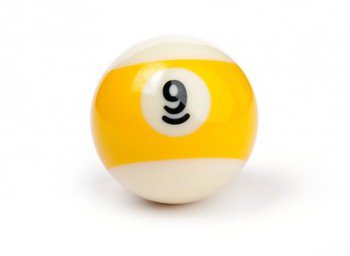 The rules and strategy for playing the 9 Ball Billiards game, are deceptively simple, however as always there is far more to the action than originally meets the eye. In recent decades the game has been televised pool's darling, due to its pocketing action and explosive open break.

The game is very much a rotation game, and the player shoots at the lowest numbered ball. If for any reason the 9 Ball falls on any shot at any time including the break, the player wins!

The balls are numbered from one to nine and are racked in a diamond shape. The 1 ball is in front so the player can hit it on the break without any measure of difficulty. The 9 ball is in the center for added protection, to avoid being pocketed right from the off. Unfortunately, beginners tend to forget to position the ball correctly in its rightful place and when playing a live game in a bar or pool hall that's an open invitation to hustlers where they often find victims in abundance.

There are some typical rule additions that include the likes of the "Three Foul Rule". This is where three scratches or fouls on three consecutive turns, results in the end of the game. It should be noted that the rule is only enforced if the opponent has made a verbal declaration that two scratches have already taken place before the third infraction is made. It's not unusual when in the presence of a skilled hustler for them to position the balls so as to make their victim foul 3 times in a row, and as a consequence for them to lose the game, along with accompanying stake.

In 9 Ball, the "Push Rule" allows for the incoming player once the break shot has been completed, to shoot the cue ball anywhere avoiding contact with the lowest ball for a defensive play. The opponent can either accept the push or force it to be re-taken. As before, The hustler is well positioned to immediately start hiding the cue ball. Be sure to be alert!