About The Color of Money (Pool Movie) 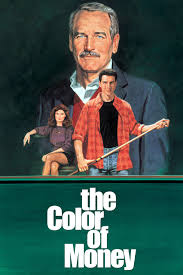 As the game of Billiards became more popular, it is no mystery why writers have taken a fancy in it and made a core of one of the most revered novels that eventually came to life in a movie - this was the color of money (pool movie). The original novel was named the same as the movie which made it easy to connect to each other and was written by none other than Walter Tevis, released on 1984. The movie was given to life through the direction of Martin Scorsese, supported by Richard Price who was in charge with the screen play of the movie. It was released on 1986 and was starred with some of the most popular artists of that time, even until today.

The artists that played on the Color of Money were Tom Cruise and Paul Newman, along with more popular names like John Turturro, Helen Shaver and even Mary Mastrantonio. The film was also a sequel of 'The Hustler' which was also a novel that was the predecessor of this movie and novel. Both novels were adapted into film and of course, both tackled the stakehorse and pool hustler known as 'Fast Eddie' which was Edward Felson. Also, the difference between the two films was the fact that they were released by different names - the first one was released by the '20th Century Fox' while the second one was through the 'Disney's Touchstone Pictures'.

This movie started showing the continuation of the life of Edward Felson, 20 Years after its predecessor movie. During this time, the revered pool hustler was no longer part of the industry and has retired from it. However, though Tevis actually supported and even authored some screenplay in the movie, it still deviated from the novel's story as the makes of the film wanted to change what happened in the novel. Still, even with this, the pool hustler was shown marvelously and the film attracted attention across the globe.